THE LATEST NEWS FROM THE VIDEO PROJECT

Welcome to Our New Site

Posted by Steve -- on 10/12/2016 to News
We've just upgraded The Video Project website, as you no doubt have seen.
Our new site features an entirely new design and is mobile responsive for viewing in phones or tablets. We've also made it easier to browse and find the films that may be most relevant to you.
And we now offer Digital Site Licenses to colleges on most titles for just $100 more than the DVD price.
• Find our Newest Releases here >
• Browse our films by Subject here >

We welcome your feedback. Please let us know how you find the site,  and if you run into any issues.
Click here to send us an email with your comments.
Thanks for visiting!
Read More

Posted by Steve - on 10/11/2016 to News
Very good news for the world’s oceans. The last pristine ocean ecosystem remaining on earth is now protected thanks to a landmark agreement hammered out by 24 nations and the European Union. Over 600,000 square miles of the Ross Sea in Antarctica will be off-lmits to commercial fishing and hunting of marine life.The Ross Sea is a deep bay in the Antarctic Ocean, which produces about three-quarters of the nutrients that sustain life in the rest of the world’s oceans, upwelled by currents that carry them around the world.BBC - World’s largest marine protected area declared in Antarcticahttp://www.bbc.com/news/science-environment-37789594THE LAST OCEAN film profiles the Ross Sea and the long international battle to protect it. Featuring top scientists, including Dr. Sylvia Earle and Dr. Daniel Pauly, as well as international political leaders, the film examines both the science and politics behind the efforts to preserve Earth’s last truly wild ocean.
Read More

Posted by Steve -- on 10/8/2016 to Conferences
The 2016 American Public Health Association (APHA) Annual Conference has selected six Video Project films to screen at the event in late October in Denver.

The six films are:

How I Got Over

The Battle of amfAR

Films for the 2016 Elections

Posted by Steve -- on 10/4/2016 to News
A selection of our films that provide background on key issues or historical context for this year's election. and beyond.
California High: The Great Marijuana Debate
A balanced look at the controversy over the legalization of marijuana and its far-ranging consequences.
Geraldine Ferraro: Paving the Way
The life and impact of the woman who made history as the first female Vice Presidential nominee of a major political party.
Political Animals
Chronicles the ground-breaking LGBT civil rights victories of the first four openly gay elected California state legislators -- all women.

Barber of Birmingham
Oscar Nominee. The history and impact of the voting rights movement through the personal story of a Southern barber and activist.

Pete McCloskey: Leading from the Front
The story of former Republican Congressman Pete McCloskey, a true political "maverick” who broke the usual party mold for politicians.
VIEW ALL >
Read More

DOWNLOAD PDF WITH ALL 2016 NEW RELEASES>
The PDF is linked to all film pages. 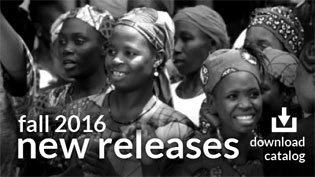