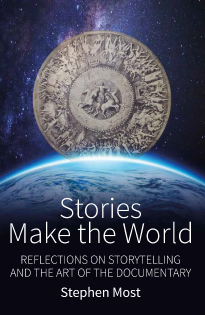 In Stories Make the World award-winning screenwriter Stephen Most shows how documentary filmmakers and other non-fiction storytellers come to understand their subjects and cast light on the world through their art. This is a crucial account of the principles and paradoxes that attend the quest to represent reality truthfully.

River of Renewal documents years of struggle in which farmers, Indian tribes, and commercial fisherman defend their ways of life, then reach consensus about restoring the ecological and economic vitality of their watershed.

A Land Between Rivers tells the story of the transformation of central California between the San Joaquin and Kings rivers.

Places for the Soul examines the architecture of Christopher Alexander and his radical challenge to contemporary ways of building.

Oil on Ice connects the fate of the Arctic National Wildlife Refuge with the critical decisions America is making about transportation and energy production.

Nature's Orchestra follows musician and soundscape ecologist Bernie Krause to the Arctic National Wildlife Refuge on an expedition to record voices of nature that are indicators of climate change.