THE LATEST NEWS FROM THE VIDEO PROJECT
Posted by Steve -- on 11/22/2016 to News
Physicist Richard Garwin, profiled in the film GARWIN was awarded the Presidential Medal of Freedom Tuesday, Nov 22. Garwin helped shape history as designer of the first hydrogen bomb and later as a science and arms control adviser to Presidents, including on climate change and energy. Through his work at IBM’s research center, Garwin is also known for his contributions to Magnetic Resonance Imaging, computer touch screens and laser printing.

The film GARWIN follows Richard Garwin's life and work. He received his Ph.D. under Nobel Laureate Enrico Fermi, who later invited him to work at Los Alamos on the nation’s nuclear weapons program. Fermi called Garwin "the only true genius he ever met".  In recent years he was part of an elite group of scientists asked to help plug the BP oil spill and find solutions to contain the Fukushima nuclear disaster in Japan. His lifes’ work was also honored with the National Medal of Science.

"GARWIN is an excellent introduction to the life and scientific accomplishments of one of America’s treasures.”
-Michael Gregg, Professor Emeritus, Applied Physics Laboratory, University of Washington

“Garwin is arguably the most important individual defense consultant of the past half-century -- supplying a steady supply of calm and informed advice to presidents from Eisenhower onward."
-Physics Today

"Captures the achievements and personality of a physicist of exceptional skill…. It takes the viewer into an insider’s world of science and policy."
-Prof. Alan Middleton, Chair, Department of Physics, Syracuse University
Previous Post
Next Post
Item In Cart 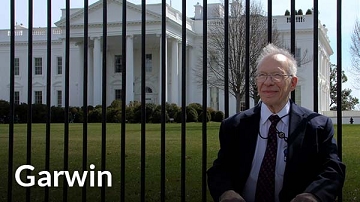